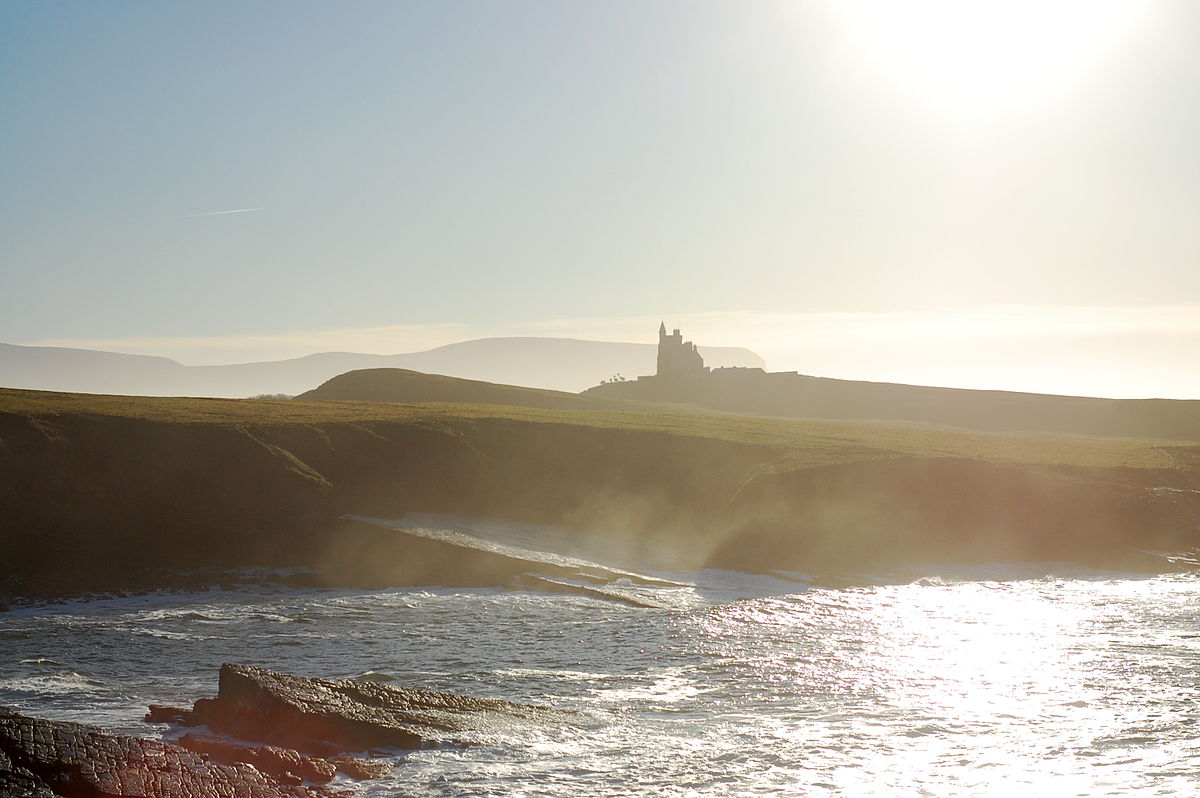 Mullaghmore is a small fishing village that should be on any outdoor enthusiast’s itinerary. The sandy beach here stretches as far as the eye can see and is ideal for a spot of swimming or windsurfing. You can also venture out into the Atlantic for an excursion to Inishmurray Island or a sea angling trip. If you’re more of a landlubber, there’s plenty here for you too. Go for a leisurely stroll and take in panoramic views of Sliabh Liag or watch the waves crash under Classiebawn Castle. You can also enjoy surfing as a spectator sport, remaining on the beach while watching top international surfers ride some of Europe’s best waves. Many come for Prowlers – a famous spot where swells can reach up to 30m – and practice the towing technique involving jet skis. These skilled big wave surfers are exciting to watch, but the waves tend to be best in the winter months, so you’ll no doubt want to hurry back into a cosy pub where you can warm up by the fire.

Escape to the small fishing village of Mullaghmore which should be on any outdoor enthusiast’s itinerary, especially for those chasing the next big wave. The sandy beach stretches as far as the eye can see and is ideal for a spot of swimming or windsurfing. You can also venture out to the Atlantic for an excursion to the 6th century monastic site of Inishmurray or enjoy a sea angling trip.

Surfing:
Mullaghmore is one of the best big wave surfing locations in the world. On 8 March 2012, surfers and windsurfers from all over the world rode waves up to 15 metres (49 ft) high off Mullaghmore Head. These waves were about five metres less than the tallest wave ever recorded in Ireland in County Donegal on 13 December 2011, which was 20.4 metres (67 ft) high. The waves in Mullaghmore were generated by a complex weather system nicknamed the "Viking storm" leading to the best big wave conditions in the area for the month of March for 15 years. Some riders suffered bruising as well as broken bones and surf boards.

A North American low pressure system moved east and combined with another cyclone in the Western Atlantic. This system moved into an area off the coast of Ireland that already had high waves owing to a series of strong systems the previous week. In addition, a strong anticyclone over the Azores created a large pressure gradient in the North Atlantic that directed a strong fetch towards Ireland. There was also an extended fetch length in the North Atlantic in the direction of Europe while the swell was created. These combined conditions produced waves that were confirmed by satellite data on 7 March 2012 to have exceeded 15 metres (49 ft) in height. 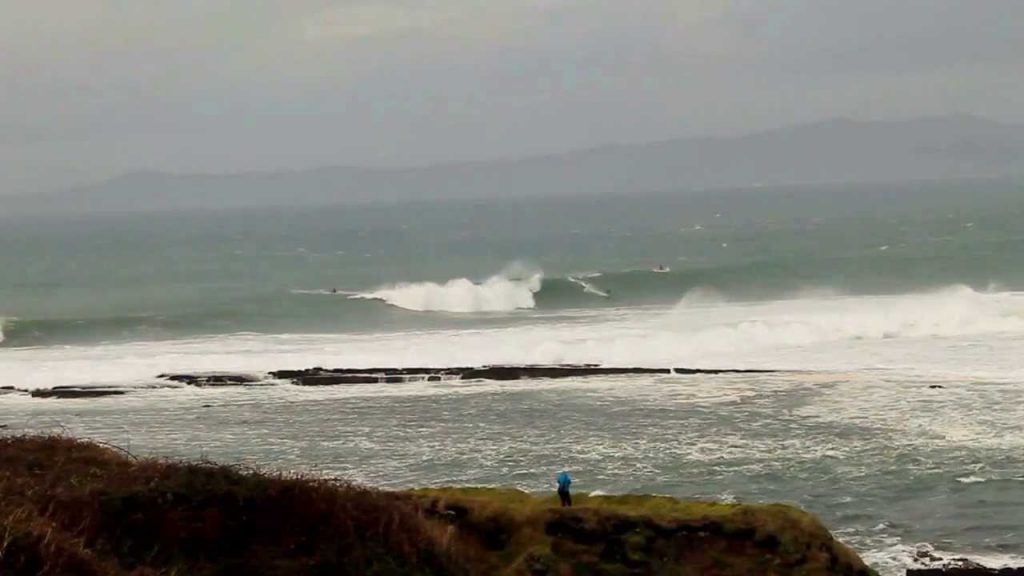 History:
From the 17th to the 19th century it was part of the large estate belonging to the Temple family in north Sligo. The land, some 12,000 acres, was granted to Sir John Temple, 1st Viscount Palmerston and Master of the Rolls in Dublin. The 3rd Viscount, Henry John Temple, better known as Lord Palmerston, began the building of the castle of Classiebawn, a baronial style house standing on the peninsula. He also built the stone-walled harbour in the village, which was designed by the marine engineer Alexander Nimmo. It was built between 1822 and 1841. The Temples were mostly absentee landlords, with the estate being run initially by middlemen, and later by land agents, such as Stewart and Kincaid a Dublin firm with offices in Sligo. These agents, in their attempts to make the estates profitable, oversaw the "assisted emigration" that took place on the Palmerston and adjacent Gore Booth estate that began before the famine and continued until at least the 1860s.

Thus, in May 1862, a Sligo newspaper reported: "In accordance with a custom of some years standing, about sixty persons have been selected for emigration from the Parish of Ahamlish … whose passages and outfit has been provided by his Lordship. They consist of twenty-four young girls, and twenty young men, families who were wholly unable to support themselves … who had asked the favour of being sent out. The emigrants took their passages … this day, for Liverpool, en route for America."

Lord Palmerston presided over Mullaghmore and North Sligo during the worst years of the Irish Holocaust, the great famine of the mid19th century. During the summer and autumn of 1847, nine vessels, carrying over 2,000 persons left Sligo port with tenants evicted and “shovelled out” from his Sligo estates. They arrived in Canada half naked and totally destitute. The city of St. John in the Canadian province of New Brunswick had to take many of Palmerston’s evicted tenants into care and, outraged, sent a scathing letter to Palmerston expressing regret and fury that he or his agents, ‘should have exposed such a numerous and distressed portion of his tenantry to the severity and privation of a New Brunswick winter ……unprovided with the common means of support, with broken down constitutions and almost in a state of nudity without regard to humanity or even common decency.’ The graves of many of these unfortunate victims can be seen today on the old quarantine station, now a museum, at Grosse Ille near Quebec. 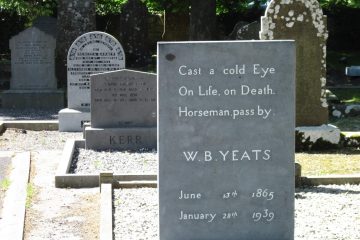 admin May 31, 2018
Spend some time in the northeast of the county in pretty Drumcliffe, where you’ll find the grave of beloved Irish poet and
Read More
add comment 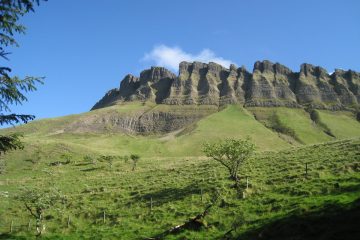 admin May 31, 2018
Benbulben is known as County Sligo’s 'Table Mountain' and is part of the Dartry Mountains. Benbulben was formed as a result of
Read More
add comment
Sligo

admin May 31, 2018
Known locally as the Abbey, this Dominican Friary was founded in the mid - 13th century by Maurice Fitzgerald. The site contains a great wealth of
Read More
add comment 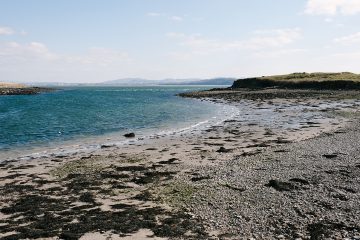 admin May 31, 2018
Coney Island, in County Sligo, is approximately 400 acres and is so named because of the vast quantity of rabbits which can
Read More
add comment 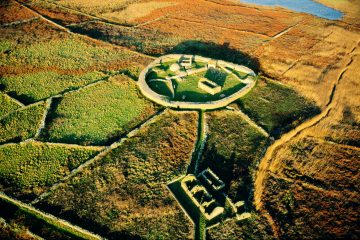 admin May 31, 2018
Inishmurray Island - off the County Sligo coast, is an early Christian site and now a wildlife sanctuary. It was a secluded
Read More
add comment