DownPatrick Head is a headland between Ballycastle village and the archaeological site of Ceide Fields. It commands breathtaking views on the Atlantic, the Staggs of Broadhaven to the west and high stunning cliffs to the east. Here Saint Patrick founded a church whose ruins can be seen todays. There are also a statue of Saint Patrick erected in the early 1980's, which replaced a previous one erected in 1912 and a small stone building, used as a lookout post during the Second World War with its stone aerial markers: EIRE 64. 'Poll na Seantainne' is a spectacular blow-hole with subterranean channel to the sea. It is well known in the local history because during the 1798 rebellion 25 men, Irishmen and French soldiers, lost their lives taking refuge on the ledge at the bottom, but unfortunately tide came in before ladders could be replaced. 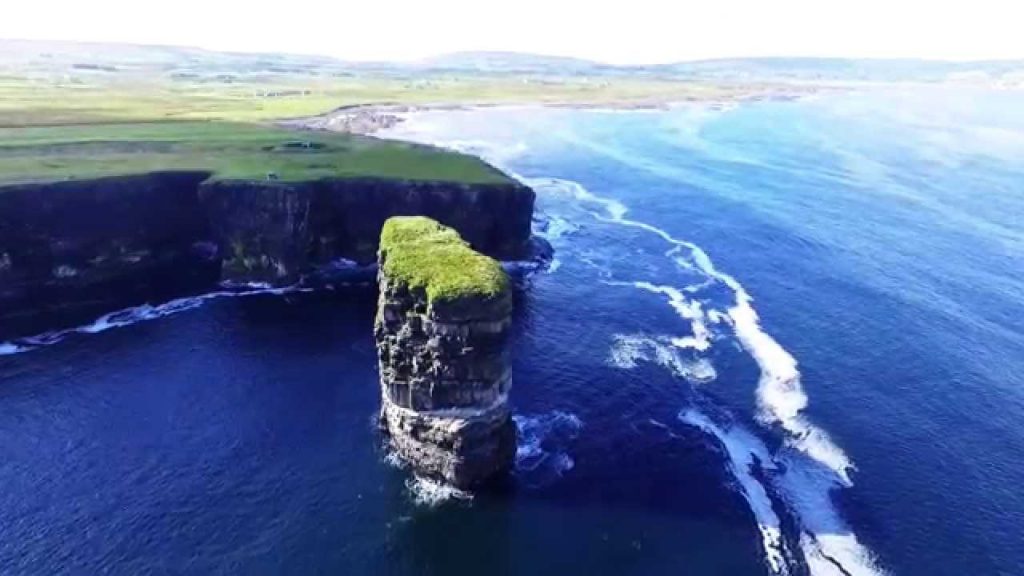 From DownPatrick Head the most fantastic view is of 'Dun Briste'. Dun Briste, (in English 'The Broken Fort'), is a sea stack close to the edge of the cliffs, which is 63 metres by 23 metres, 45 metres high and 228 metres from shore. In 1393 it was separated from the coast as a result of high seas and violent stormy weather. Old annuals said people who lived there were taken off using ships ropes.

According to an old local legend, a Druid Chieftain, named Crom Dubh, lived there. He refused to convert to Christianity, Saint Patrick struck the ground with his crozier and the stack was separated from the mainland, leaving Crom Dubh to die on the top. On July 31st 1980, Dr. Seamus Caulfield, his father Patrick Caulfield and Martin Downes, Professor of Biology at Maynooth College, landed by helicopter on Dún Briste and discovered the ruins of two stone buildings and an interesting low opening which is supposed to allow sheep to pass from one field to another. Similar openings can be found in many places all around Mayo. They also examined the fragile plant life on the stack's top. DownPatrick Head is one of two discovery points on the Wild Atlantic Wayin Mayo and hosts the 2014 Spirit of Place, a new installation to commemorate the natural power and richly-layered historical tales of the site.